Assorted Thoughts: A Month In

We’re almost a month into Mists of Pandaria; doesn’t seem like that long, does it? We’ve tilled our farms, we’re earning our rep, we’ve stepped into some heroics or LFR or raids, and we’re starting to get a feel for this expansion.

So far, I dig it. I was never overwhelmed and blown away, but it’s like the whole expansion sneaked up behind me and surprised me with little bits of awesome. I’m enjoying the expansion as much as any other at this point, and that’s saying something, since MoP had me concerned from the get go.

Here’s a few thoughts from my experiences so far; how have yours differed? What’s going on so far with you, or what’s demanding your attention?

I like dailies. I really, actually do. They’re a great way for me to get things accomplished without being chained to my computer for 30+ minutes at a time. I can stop in the middle, go hang out with my kids, answer the phone, chat with a friend, and when I come back, I’m right where I left off.

I will say that unlocking Shado-Pan and August Celestials made my head spin a little. Shado-Pan is probably my least favorite group of dailies, mostly because my Pandaren companion hasn’t learned to Shadowmeld and Swift Flight. We’re working on it, though.

In order to raid, my guild needed more healers. I’ve certainly healed here and there along the way for particular fights, but I haven’t been a dedicated healer since Burning Crusade. However, the biggest problem I’m having is one that I’m sure a lot of healers have had this expansion: healing as if the way we use mana hasn’t changed.

Even though I know exactly what I should be doing, I end up falling into old habits when the damage starts getting high, and pretty soon I’m watching the Innervate cooldown. I’m going to have to keep working on making new habits.

The good news is, I actually enjoy healing again (SHH, don’t tell anyone). It’s been long enough that it doesn’t feel like the same old, same old way it used to feel.

Plus, I’m a tree again. That alone is enough to make it worth it. 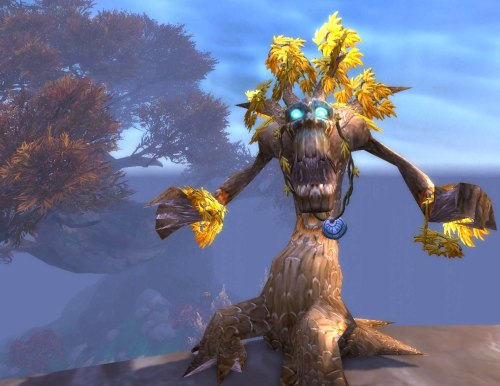 Right before and right after an expansion hits, it’s not unusual for a guild to go through some growing pains. Some people move out, other people move in. This time, though; it was a big deal for me. Several people I’ve raided with for years were unsatisfied with 25-mans and decided to leave to join a 10-man guild. It’s better that they did this in the long run than be unhappy, but I find that I miss them quite a bit.

It’s led me to think about what my priorities really are when it comes to raiding. Do I still care as much about 25-man content as I thought I did? I don’t know right now. Do I need the “epic” of 25-mans (bigger raids have always felt more epic to me; I know not everyone agrees) or could I be satisfied with a 10-man?

With that group went some of the people I consider my closest in-game friends, and perhaps just as importantly, the ones that took me seriously as a player and to whom my opinions mattered. I’ve discovered that particular aspect is more important to me than I realized. I’m interested to see what happens in the next month or so as we progress, and how I ultimately decide my priorities. Right now, it’s still unclear.

Raiding is still fun; that much hasn’t changed, at least!

A Letter to World of Warcraft Raiders

It’s the end of the expansion. None of us have failed to realize that, I promise. Some are farming for Mists and leveling alts, others are taking a bit of a breather or playing different games–I get that. I’ve been victim to it too, lately. Besides, everyone needs a break now and then, and if you’ve been pouring time into Cataclysm non-stop since it came out, you’re probably due one.

However, can I make one simple request? Please tell your guild before you stop showing up to raids. Really, it’s a courtesy. The 9 or 24 other people who are showing up are counting on you to be there to fill the raid and kill bosses. END_OF_DOCUMENT_TOKEN_TO_BE_REPLACED

Reactions to the Latest Cataclysm Info

Quick Intro: Last night Blizzard released info to their official fansites and announced a few changes from the original Cataclysm described in Blizzcon 2009. I’m not going to go into the details of each change; you can find those at MMO Champion and WoW Insider.

Adding my voice to the chorus of opinions on the WoW blogosphere this week, here’s what I think about each change, point-by-point (I apologize for the very girly coloring, but I swear it helped me organize my thoughts. Also made me feel like throwing on some lip gloss): END_OF_DOCUMENT_TOKEN_TO_BE_REPLACED