“April is the cruelest month.”

First, there’s Mythic Blackhand, the tyrant hanging over our heads for the entire month of April. There’s something about that boss, man; he’s really good at making people exceptionally tense.

Getting him down felt good. Not the same way Imperator felt good–the Imperator kill felt like a perfected dance, a 5-star performance on opening night kind of good. Blackhand felt like a battle won, like putting away our swords and wiping dirt and blood off of our faces with a resounding “Hell yeah, we’re still here.”

This month has been a different sort of interesting for me, as well. Some people and situations within my guild pushed me to the brink of leaving–far enough into the gap, in fact; that I applied to other guilds (and met some pretty cool people, I might add).

I felt obligated to stay through the Blackhand kill, and during that time there’s been a concerted effort to make things a little less frustrating. This left me at a difficult juncture: do I leave my guild and the friends I have here and try something new with people who seem nice? Or do I stay with the people I like, deal with the ones I don’t, and give my guild a second chance?

In the end, I believe I’ve opted for staying home. Maybe I’m screwing myself over, but I love this guild, I just want it to like me back.

I Didn’t Need It Anyway 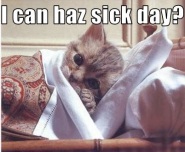 We killed Blackhand on a Monday night. The Sunday previous, I’d started having lower right abdominal pain. I took some ibuprofen and pressed on. Monday was miserable, but I sucked it up, a little more ibuprofen, and we killed the boss.

The next morning, I could no longer ignore the pain, and a visit to the ER later, I was being scheduled for surgery to remove my appendix.

The Twitter community was, of course; as supportive and cool as they’ve ever been, sending me well wishes and virtual hugs throughout the process. I’ve said it a hundred times, the WoW/Gaming/Geek Twitter community is one of the best, and you’d be hard-pressed to convince me otherwise.

I wish I could say the process was painless; it wasn’t. It mostly sucked. My belly button hurts, my back hurts, my side keeps cramping, and I’m under these pesky orders not to do much of anything. But hey, I’m home and not dead, so I think I came out on top.

I’m kind of glad April’s over, though. I need May to be chill.