World of Warcraft Isn’t Real, And My Name Isn’t Ambermist

Heads up, this one’s long, personal, and maybe sort of pointless, but it’s been swimming around in my head for a long time, and since I did just ask everyone to tell me about themselves, it seems relevant.

This post has been in my head for months–as a matter of fact, I started writing it there the day I came back to this blog, but I kept coming up with reasons not to flesh it out and post it.  When I came up with the July Challenge, it was on my mind, and then I read this post at Tree Heals Go Woosh (which is, by the way, the best blog name ever). It got me thinking about all of that stuff again since the end of Wrath/beginning of Cataclysm brought a lot of this to the forefront for me.

Over the course of Wrath, I learned so much about WoW. I’d been playing half-blind for a couple of years, I realized, and with the leap into blogging, I suddenly had a world of information and experiences at my fingertips. As an expansion, Wrath encouraged that exploration, and I honed a lot of my skills there.

I had a lot going on in my life during that expansion, too; a lot of change: my father-in-law passed away from cancer, my brother-in-law had a heart attack and a stroke, my daughter started kindergarten, and my son was diagnosed with autism. I was stressed out, at my highest weight ever, dealing with my own issues on top of everything else, and profoundly insecure.

I started using WoW and its many, many things to do as an escape, but more than that, I started to find my identity there. I didn’t know who I was out here. To myself, I didn’t have any worth out here in the real world. I couldn’t stop the pain my husband was experiencing from the loss of his father. I didn’t know how to reach my son. I felt like I was shortchanging my daughter.

In WoW, I was becoming a decent moonkin, my dps improving little by little as I grew determined to become a better player. My raid awareness improved leaps and bounds. I was writing boss strats for this blog, so I knew the fights inside and out. I was succeeding in Warcraft at the same time I felt like I was failing in the real world.

I did what I could with my family, I did everything I knew to do with my kids, I comforted my husband the best I knew how, but I never felt like I was doing enough. When they all went to bed, I’d log in to WoW and  be someone that didn’t suck for a while. When I did fail, I took it hard, because more and more I was finding my security in the game.

At the end of Wrath, most of the guild was burned out, myself and my husband included. Everyone had much shorter tempers, and those that were past getting irritated had gone completely indifferent. There was a lot of bickering, a lot of being nasty behind people’s backs, and a lot of disappointment. We were on edge, and we got pushed too far. After a tough week of discussing it with each other and with the officers, we left our guild of four years. It sucked, and my safe WoW identity began to crumble.

We found a new guild and joined, and they were great. They weren’t raiding at the time, which gave us some breathing room before Cataclysm came out. We went into Cataclysm raiding and hoped for the best; we enjoyed the fresh, mostly positive attitudes we found in our new guild. 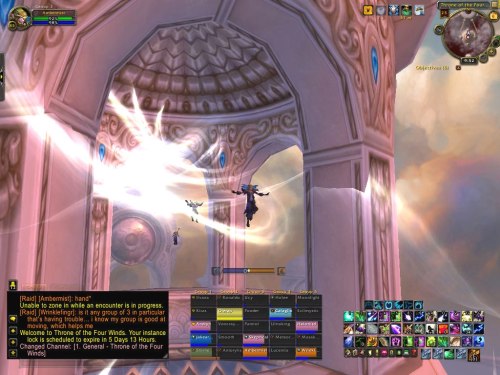 But every guild has its issues, and when we went to 10-man from 25, things got messy. People started to quit–the people we felt closest to in our new guild started to fall away one by one. The things tying me to WoW were disappearing.

I won’t go into details, it’s kind of personal (I know, like the rest of this isn’t), but I had my eyes opened to what I needed to be doing one night to connect with my family, and I quit raiding altogether.

With the end of raiding came the end of WoW for me for a while. I play to raid; I always have. Everything else is fun, but it’s not raiding. Over the next several months, I got to know both my kids a little better. I spent more time with my husband. I refocused on my faith. I started writing fiction and poetry. I started to figure out who I was.

The biggest change, though, came when my husband and I kicked our weight loss into high gear last summer. Suddenly, I could do things–things I thought were impossible. I could walk for miles, lift weights, even run!

My writing started to garner some appreciation. I watched fat start to melt away. I grew closer to my husband and spent more time with my kids. I learned more about my faith and where I stand. My accomplishments stacked up; my confidence grew. I didn’t need WoW to tell me I was a worthwhile person anymore–I was proving it to myself in all the ways that really mattered.

When the kids started school, I suddenly had time on my hands. They were gone for hours during the day, and they went to bed early at night. I realized I missed WoW, and I started playing again. Through a random encounter with a former guild member (and friend) in Baradin Hold, I rejoined my original guild. They needed raiders, and I was in a position to give it a go again.

I’m not just Ambermist the druid (though I like being Amber very much, don’t get me wrong! :D), I’m a lot of things. I’m a mom, wife, friend, writer. I’ve accomplished things that have nothing to do with achievement points.

The game is fun again for me, not because it changed, but because I did.

22 responses to “World of Warcraft Isn’t Real, And My Name Isn’t Ambermist”