*Secret Santa!* 2011 – Expectations & Resolutions for a New Year of WoW

About a week ago, names were secretly exchanged and WoW bloggers everywhere began to formulate what to write for their yearly Blog Azeroth Secret Santa guest post. This year, Redhawks from Redhawk’s Gaze is my Secret Santa, and this post has two of the things I love: lists and lolcats! Thank you for your post, Redhawk, and I hope you have a great New Year, in-game and out!

2011 – Expectations and Resolutions for a New Year of WoW 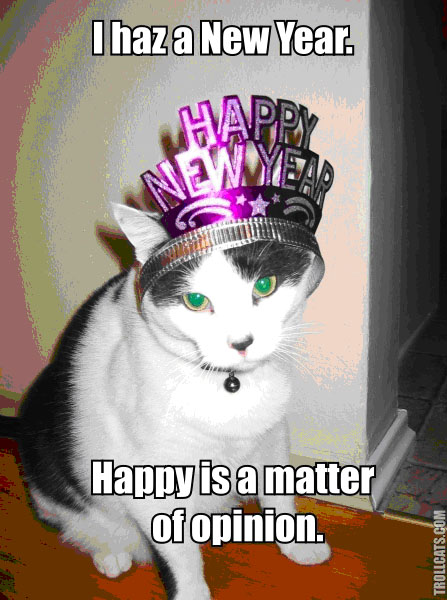 WoW players, especially raiders, are always looking forward to the next thing.  Whether it is the next raid boss kill, the next Tier of content, or the newest gear, we have our vision always set forward.  As we are approaching 2011, I thought about looking at what I hope is coming down the road for WoW and moonkins in general as well as some personal resolutions for the New Year in terms of WoW.

1)      Better Content Spacing – I hope we do not fight Deathwing for over a year from when the final raid patch is released.  As much as I loved the LK fight, doing it over and over again for an entire year was a little much.   Hopefully, Blizzard has learned from that.

2)      Keep Heroics Relevant – At the end of Wrath, there was almost no reason to do heroics until they introduced Justice Points.  Not only should they keep them relevant in terms of gearing up, but keep them relevant in terms of difficulty.  I love the current difficulty of heroic dungeons and while they are becoming a little easier with better gear, I hope they don’t go away completely and make it so that we can just AoE stuff again.

3)      Make Me Want to Use Wild Mushrooms – Right now, I feel like there is not much of a reason to use them, especially when you are getting huge 60k crits during the Halfus fight.  There is one of two ways to do this.  First, set up scenarios in raids where I could use it.   Make it so you can only do instant cast spells during a portion of a fight or something.  Second, make them more powerful to make it worth using 4 GCDs to actually use it.

4)      Fix the Jewelcrafting Dailies – It is insane that I have to spend 160 gold to get 18 gold reward and a token.  Just give either multiple tokens or more gold.  Something to offset the cost of the green gem that I just had to buy and cut for you.  Or make it where you just have to get three of the gem and not have to cut them yourself.

5)      Fix the average iLevel – Although I was one of the people who were telling people to hold onto gear they wouldn’t necessarily use to raise their average iLevel was a mistake.  It would be a simple fix.  The average iLevel number should only be the number of the gear you have on, not your best set of mismatched gear.

1)      Clear Every Tier On Heroic – In ICC, it was the first time where I got to experience hard modes constantly and my guild, Conquest, finished Glory of the Icecrown Raider on both 10/25 man.  Now that I have had the taste of it, I want to try to clear every tier on heroic in 25 man raids.

2)      Play the AH More – I never really have tried playing the AH up until recently, but it is something that I have grown more and more interested in.  I have actually started looking at bid prices and items where I can control a market.  I would ideally like to hit the gold cap in Cataclysm.

3)      PvP – I would like to get to the point where I have an 1800+ rating in our rated PvP battleground group.   I love that I can raise that rating now without necessarily having to do arenas.

4)      Be A Little Nicer to PUGs – I tend to be extremely nice in PUG/LFD groups.  However, if you do something that is just incredibly stupid, I have a tendency to tell you about yourself.  This is something that I have to get used to that some PUGs don’t know what they are doing.   However, I should also be a little nicer to said PUGs.  They are on to just play a game.

So as you start out this year, I encourage you to do just what you do in your normal life anyway.  Set up some resolutions and put out what you are expecting for the New Year.  However, don’t forget about them a month in.  Follow up on them and do what you can to make those resolutions come true.

So with that, I want to wish everybody at Battle Chicken a very Happy New Year.  May your 2011 be your best year yet both in and out of WoW.